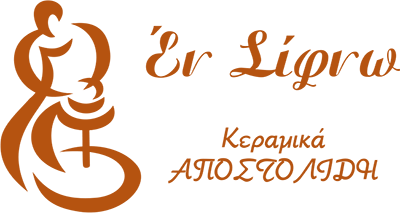 From the past to the present

"Clay is earth and transferring ideas on clay is like breathing life into earth!"

​The grandfather Giannis Apostolidis was the first to work on pottery, and he also initiated in this art his first born son, Simos, at a time when conditions were hard and the potters ("tsikalades" as they were named after the earthen cooking utensils they manufactured that were called "tsikalia") used to stay for a long time at their workshops, away from their homes.

Near his grandfather, who was one of the most important and awarded Sifnian potters of the last years, Simos Apostolidis took his first steps in the art of pottery. Simos went through many phases until he perfected his art and managed to open his own workshop.

At nine he was apprenticed to Giorgos Venikouas, at his workshop on Herronisos and then he followed his uncle Apostolos Fyssas in Syros. In 1936 he went to Halandri, in Attica and stayed there for four years, working at the pottery workshops of Nikos Toulis and Alekos Kardiakos, where he learned new forms and techniques. Then he returned in Sifnos and worked in Platis Gialos, at the workshop of his father-in-law, Fratzeskos Lemonis.

Being taught the art by his father, Giannis became his worthy successor and practices for many years now the art of pottery with passion and love.

Over the last years, he transferred his workshop to Kamares, where you may visit him and watch him create on his wheel traditional objects and original ceramics full of imagination, giving life to the clay.

Always being a restless mind he often leaves the ordinary forms to create different ones, original items and during the summer months, he demonstrates them in showrooms mainly in Sifnos. Apart from his personal exhibitions he often participates in other artists’ exhibitions.

Keeping his family tradition and under the supervision of his experienced father Giannis, young Simos already takes his first steps in the magic world of ART and of CERAMICS-POTTERY.

We would like to thank for their photographs: Triantafilos Alexiou, Varvara Spiliopoulou, Giannis Kontos, Emily Bedixen and Jacqueline Meier.

​Giannis Apostolidis’ "En Sifno" pottery workshop is located in the area of Leivadas, on the central road from Kamares to Apollonia. More...

Location on the map

​Watch the video that was filmed from a guest.

​Watch the video that was filmed for a TV show.